Thank you to the Hollywood Music in Media Awards for the nomination as best Indie Score of 2011.

“deeply passionate and etheral…strikingly original…unfathomable beauty…This is an important score in the continuing evolution and maturation of American motion picture music…rising to spiritual heights unheard since the glory days of Alfred Newman…a powerful testament to the undeniable truth of music’s power to elevate its visual counterpart to infinite grandeur and glory…”
americanmusicpreservation.com

“From Start to finish McKenzie’s score washes over the listener in waves of beauty…It’s a firm candidate for score of the year: beautiful, moving and powerful, and proof that it’s not only Ennio Morricone who’s willing to put faith in soulful, spiritual film music. The Great Miracle will be very difficult for other scores to top in 2011.”
– Sean Wilson
http://www.mfiles.co.uk/reviews/mark-mckenzie-the-great-miracle.htm

“Mark McKenzie writes some of the most beautiful , lyrical and emotionally resonant music ever written for film – and I do mean ever written for film…Film scores like this don’t come along too often. Music so passionate, so moving, so warm.
– Jonathan Broxton
http://moviemusicuk.us/2011/03/26/the-great-miracle-mark-mckenzie/

“I don’t think any of his scores have ever quite reached the heights of this one, surely the pinnacle of his career to date…Scores like this don’t come along too often.”
http://www.movie-wave.net/?p=1266

“The Great Miracle” is an inspired score…Scores such as this happen rarely, and when one does emerge we should embrace it, savour it, adore it and shout from the rooftops about it. An essential purchase!
– John Mansell:
http://www.runmovies.eu/index.php?option=com_muscol&view=album&id=529

“…a soaring, spiritually powerful score…To say that it is beautiful is a gross understatement.”
– James Southall
http://www.movie-wave.net/?p=1266 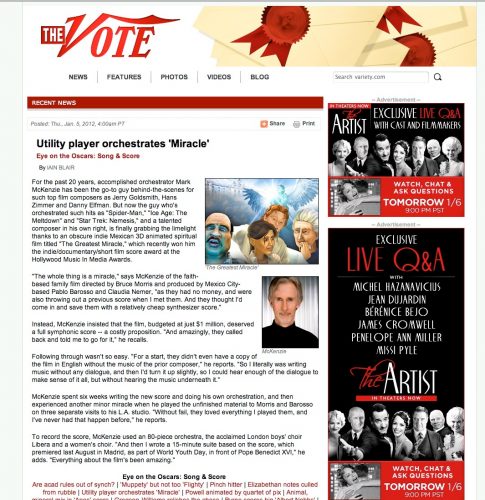